I was writing some pieces for an online course I'm teaching for Cherry Hill Seminary, and developed a photo-essay from a trip out into the Angus countryside on Saturday. So I'll attempt to post it here too. Alas I can't just post the pdf, apparently!


Last Saturday I  drove out towards the Sidlaw Hills, a few scant miles from my house on the outskirts of Dundee. My purposes were vague, only to explore a couple of places I had not seen, possibly investigate one of the local stone circles, and have a gentle walk in the wild.

Balkello Community Woodland is a good place to explore. As summer draws to its close and autumn nears, rowans are laden with berries and the trees display their varying shades of green, with the richness of oak and alder against the darker spruce and pine. A good place to wander: and as I reached the north side of the woodland, the hills beyond - Balkello and Auchterhouse - caught the afternoon light. 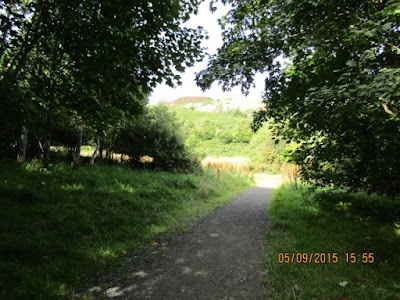 The derivation of 'Sidlaw' is not clear. 'Law' is a hill (so 'Sidlaw Hills' is Sid-Hill-Hills). The first part, though, is more difficult. Some say that 'Sid' means 'seat', and indeed one of the hills is named 'The King's Seat'. Others have names that come from older languages or blend two, as indeed 'Sidlaw' may do: Dunsinane, Auchterhouse, Balkello, Balluderan and Craigowl. The last of these is from Creag gobhal, 'forked hill', despite its name having meaning in English also. But an alternative derivation of Sidlaw is from Sidhe, the 'fairy folk', the hidden people, by which the Sidlaws would be the Hills of the Sidhe.

I think I prefer that derivation, though it may owe more to hope than to linguistic analysis.

Balkello woodland is young, and managed by the Forestry Commission: the trees were planted only in the 1990s, to create a community place which contrasts with the farmlands around and uplands beyond. It lies to the north of the road which connects the villages of Auchterhouse and Tealing. 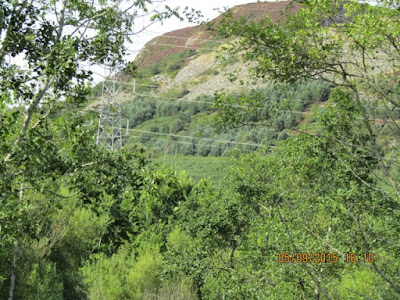 Just south of the road is a standing stone, the Balkello Stone, which will be a visit for another day. However, I'd hoped to catch site of a circle nearby at Balkemback, and find the Pictish carved stone known as Martin's Stane.

The field in which the circle sits was occupied by many cows, and would have required climbing over several barbed wire fences: again, not for this day as the afternoon was wearing on. Views from the roadside, though, showed the heather coming into its own on the hills behind, and the plain beyond stretching to the coast - a landscape farmed for thousands of years, by people who left their marks on the land, clearing fields, creating cairns, erecting stones to mark places that, perhaps, called especially to them, building roundhouses and digging souterains, carving on rock and boulder, building houses of stone and later of brick, then churches for each group of villages as those became parishes. This landscape is not 'wild', even on the heights of the Sidlaws, but changed in the interaction of humans and others through millennia. 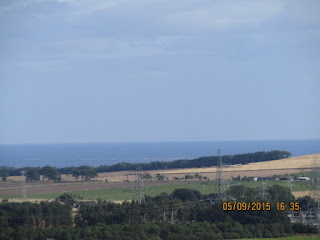 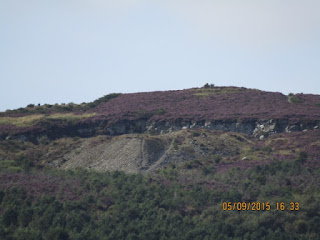 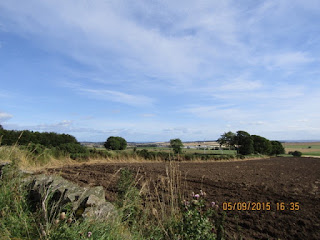 Finally, I headed for Martin's Stane, on my way home to Dundee. Some information on this Pictish carved stone is at http://www.scotlandsplaces.gov.uk/record/rcahms/31864/balluderon-st-martins-stone/rcahms
Alas, it was broken long ago, so that only part of the stone remains, with figures of a horse though the rider is no longer present, with, below, another rider and horse and a pair of 'Pictish symbols' one of which has been said locally to be a 'dragon'. Local folklore has therefore created its own meanings for this stone, linked to place names towards Dundee, but what it commemorated, or its inscription as 'sacred', may never be known.

The stone, minutes from Balkemback and Balluderan, is in a field which on my visit held glowing golden barley, waist-high or even higher, waiting for harvest. There was a narrow trackway across the field, on which I walked with care for the barley, which let me come close enough to photograph such of the images as could be seen through the waving grass around the stone and the barley between it and me. Again, this calls for a visit once the crop is harvested. 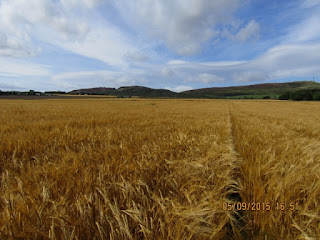 And so, the final images here are of that field and the waving barley, farmer's gold, with the stone visible through its protective railings. That I could not approach closely did not, on this visit, matter: the ripeness of the barley was, for today, enough. 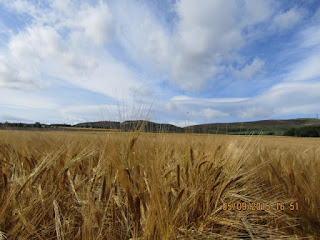 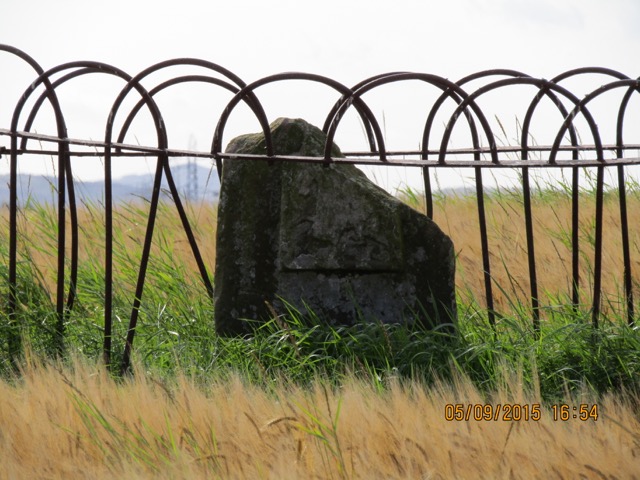 Jenny Blain
I'm recently retired from my post as a senior lecturer in Sociology at Sheffield Hallam University, where I led the MRes Social Science and taught qualitative research, epistemology and social theory, also sociology of religion. My home city is Dundee in Scotland. I've lived in Nova Scotia, then in England, and have loved many landscapes, but Scotland continued to draw me back - now I am again 'home'. The photo is of 'Leander' roses in the garden I had in Sheffield, and one is now flowering in my new garden back home. Some things about books are in my FB 'page' at https://www.facebook.com/pages/Jenny-Blain-Books-and-Other-Publications/103196373054163?sk=wall